One night, in the tavern, Wang-Fô shared Ling’s table. The old man had been drinking in order to better paint a drunkard, and he cocked his head to one side as if trying to measure the distance between his hand and his bowl. The rice wine undid the tongue of the taciturn craftsman, and that night Wang spoke as if silence were a wall and words the colors with which to cover it. Thanks to him, Ling got to know the beauty of the drunkards’ faces blurred by the vapors of hot drink, the brown splendor of the roasts unevenly brushed by tongues of fire, and the exquisite blush of wine stains strewn on the tablecloths like withered petals. A gust of wind broke the window: the downpour entered the room. Wang-Fô leaned out to make Ling admire the livid zebra stripes of lightning, and Ling, spellbound, stopped being afraid of storms.          Marguerite Yourcenar, “Comment Wang-Fô fut sauvé” 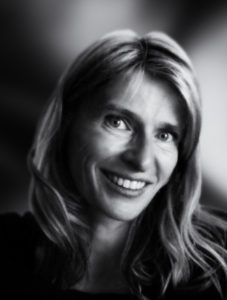 Monika Bulaj is an award-winning photojournalist, reporter, documentary film-maker, and educator, based in Italy. Her personal work on minorities at risk, nomads, faiths and shared sacredness in Eastern Europe, the Middle East, the Caucasus, Central Asia, Africa, and Caribbean, has been recognized by The Aftermath Project Grant, Leonian Award & W. Eugene Smith Memorial Fund, TED Fellowship, Bruce Chatwin Special Award, Grant in Visual Arts from the European Association for Jewish Culture, and other awards and nominations. She has studied Polish Philology at the University of Warsaw, and also anthropology, philosophy, theology. She speaks eight languages

Bulaj’s work has appeared in The Guardian, Granta Magazine, National Geographic, The New York Times, TIME, Courier International, RevueXXI, La Repubblica, Corriere della Sera, Al Jazeera, and GEO, among others. She has published 10 books, the latest being Nur. Afghan Diaries with National Geographic (in Polish) and Where Gods Whisper, with Contrasto (in English and Italian). She has displayed her work in more than 90 personal exhibitions around the world.

Bulaj was the first women to receive the Italian National NonViolence Award “for her work as a photographer, reporter, and documentary-maker which sheds lights on humanity living in the most hidden yet most evident boundaries on earth, for showing war through its consequences, for investigating mankind’s soul, our eagerness for religiosity, tenderness, and dignity. Bulaj makes the invisible visible by exploring people’s soul, by uniting humanity in an image.”

She is a teacher of  Photography and Stories/ The creative and nonfiction writing of the real, and performs in a “performing reportage” at the theatre (as screening storyteller) “Nur, Afghan Notes”,  “Where Gods Cross Borders”, with video, photography, audio, video and stories; in Italian, Polish, French and English language. She is  teacher of photography, street theater, and dance on stilts, for children in ghettos or at-risk communities. She travels across Europe with her lectures: hosted by universities, art festivals, global conferences and small villages. Monika collaborates for many radios as well, both in Poland and in Italy, and with TV, for Repubblica TV and for Rai TV Educational. She has realized a documentary movie: “Noah’s Sons” in Azerbaijan, and has screen-written documentaries, among which the movie “Romani Rat” 2002 by M. Orlandi, on the Holocaust of the Roms, where she had also a leading role and was a storyteller.

MOST NOTABLE AWARDS, GRANTS AND NOMINATIONS