Tibet, at night up on the plateau, the air at four thousand metres leaves you breathless. In the darkness the motorbike’s headlights pick out a haze of staring eyes, earrings, golden silks. In a fug of manure and wet wool there’s a dark mass that pants, gasps and groans. It’s a tribe of nomads who are moving on to the winter pastures with five thousand black yaks. They are elegant, like the wedding procession of a king, or the triumphal expedition into the interior of the horsemen of some khan. They are singing in the darkness to appease the mountains and their song is rough and nasal, with an uneven rhythm. It fibrillates in your heart then suddenly stops amidst whistles from slingshots, lullabies and calls.

The region of Amdo isn’t marked on the map of Tibet. To Beijing it is just “Western China”. Yet great masters have been born there, even including Tenzin Gyatso, the present Dalai Lama. For centuries it has been the meeting place between the “horsemen of the wind” and the Heavenly Kingdom, a land marked by love and hate, invasions and court weddings, a spiritual and theological hub such as to be the envy of Lhasa. Here the Tibetan nomads, a Milky Way of tribes that don’t stick to one piece of land, are perhaps the last outpost of Tibetan culture. I am walking with them under the stars on the edge of the Himalayas and the edge of my map. I’m in an unknown world where I don’t understand the language or even the gestures. A silent voyage, to decipher sounds. 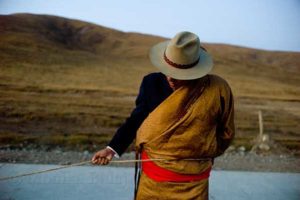 On foot, on horseback, or on old motorbikes, they travel in swashbuckling style, newborn babies tucked away in robes with extra long sleeves that give a theatrical swagger to their gestures, like characters in the Beijing Opera. The women wear very heavy necklaces and a sword in their belt as if they were going into battle; their dresses are so bejewelled that they look like travelling banks. Shy as gazelles, but free. They can leave their husband after three days’ trial, because that isn’t a sin but “maya”, a mistake. To make up for it, they work for ten. They scale terrifying escarpments in high heels, slip on stony ledges jutting out over sheer drops, they fire off slingshots into the herd to settle brawls between males, chase the baby yaks lost among the streams or the females that stray, and occasionally reveal a tantalising glimpse of a very colourful tights through the slit in their skirt. 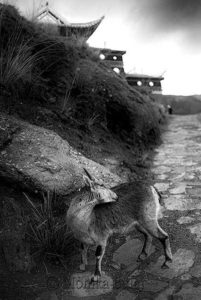 Frozen puddles, the moon can’t find a mirror to see itself in; our horses struggle with the climb, sweating; I hear their hooves creak. Amdo’s nomads move with the seasons, toying with the bans imposed by the bureaucracy in Beijing which would prefer them to be less restless, and the tyranny of climate change. The signs of this woe that is damaging the planet reach even this remote area, with tongues of Saharan sand snaking between peaks cloaked in snow.

They are equipped with mobile phones and off-road vehicles; lots of them have swapped their horses for motorbikes. Others, a monk will tell me, “have done up their tents and put roofs on them, making them into houses”.

It’s daylight now, the sun is high in the sky when we go along the pass decorated with flags and veiled in snow. On the winter pastures protected from the winds, the nomads hammer in nails to attach the tent, made of yak wool, heavy and impregnated with soot. Dra, the black tent. “Six generations have held it for safekeeping,” says Sonam, a boy who speaks English. “My grandfather wasn’t frightened of dying but he was frightened that the tent would be abandoned. Because the black tent is Tibet.” 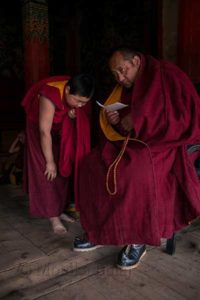 It can even become a travelling monastery, “the black monastery”, in fact. Now they have put it up, the women share the space: right and left, pure and impure, male and female. Each tent becomes a temple. Without meaning to I do something that’s forbidden, I walk between the stove and the altar. I see fear in the women’s eyes. I have violated the sancta sanctorum, now there must be a ritual. The stove is the home of the spirits, the smoke – the source of divination. Does it goes straight up? Turn right? Snake along the ground? Everything becomes a sign. To keep things right, the stove is blessed twice a day with a prayer.

The Chinese of the Tang dynasty extolled the bravery of the Tibetans who would kill their own knights if they were guilty of dishonourable surrender. Today Beijing pays three thousand yuan, three hundred dollars, for sterilisation after the birth of the first child, and limits the study of Tibetan at school. What you can’t destroy you buy. The land. The house. The monastery. And in a flash the nomad, from a free man, becomes a thief in this sea of stone, he loses his right to the land which in that culture only belongs to the spirits. They tell him: you can buy yourself a house if you leave the land alone for ten years. But in ten years the land dries up, the traditions break down, the flocks scatter. Only the state shacks thrown up by decree on the mountains remain, looking so much like the huts at Birkenau. 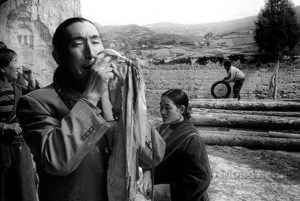 Folklore on demand survives, high-flying tourism. At Kumbum I see hordes of Han tourists, monks who beat the gongs like demons out of hours, clouds of incense that float in the temples where I don’t see anyone pray, Tibetans hired out for a few yuan in their ragged clothes; two steps forward, two steps back. “Mr pilgrim, can you move more to the right, please?”, flash bulbs, metal bars at the entrance to a temple with a smart card to pass through like on the underground. I try to get in all the same, and a fleshy monk chases me off rudely before getting into a huge SUV. The buzzword is development, the spiritus movens the lift.

The New doesn’t wait, it lays roads and builds bridges on the peaks that brush the sky, slices through mountains as if they were butter, mountains inhabited by the spirits,  excavates the earth that  for the Tibetans is the very body of a god, with breasts, head and thighs; uproots the Terma, the treasured texts, hidden in the earth, the water, the sky and the mind; it erases the tracks, decorated with flags, of the legendary Kesar of Ling, a Tibetan Heracles who waged war with demons and Mongols, Turks and Persians, and even made a descent into hell. The New even tears up Tibet’s sweet red tubers, one of the few delicacies of this miserly earth.

An endless building site destroys the facade of elite all-inclusive tourism with its glossy iconography of the Land of the Eternal Snows, the gilded domes of Potala and the endless queues of plump, smiling and peace-loving monks in their purple robes.

I take off from Xining, the capital of historic eastern Tibet, but I feel as if I am in Beijing, the grey Moloch that managed to paint the sky blue for the Olympics. A landscape of cranes and scaffolding.

Spiders’ webs of motorways and overpasses, ghost apartment blocks with dark windows and eviscerated blocks under construction beside them. Outside my hotel the smell of scorpions on skewers rises at night from the shacks, along with the cries of drunken women. The Han engineers and businessmen walk about vacantly, hugging blue oxygen tanks. Destruction makes its advance, dressed in concrete, just as two thousand years ago the emperor Qin Shi Huang punished the Xiang mountain because it had dared to unleash the tempest, levelling it to the bare bone, uprooting its trees and painting it red as they used to do with criminals.

Black tent, white yak. “When one is born, they set it free because it is sacred,” Sonam tells me. His name means “happy”. He takes me up into the mountains where they perform “sky funerals” and the dead are left for the birds. Terrible mysteries, such as that of the saints who disappeared into heaven in their own bodies. Or of Bon, the indigenous religion domesticated by the Buddhists and still recalled with fear in Chinese guidebooks.

At Tongde I notice an exchange of glances; the gazelle-like glance of a young nomad boy bedecked in rosaries, and one from a mother-of-pearl Chinese girl, atheist to her very core. A visceral hatred separates these two angelic beauties.

In Asia people walk a lot and Tibetans are peripatetic par excellence. Wandering hermits with macabre tools, nomads following herds and salt caravans, schoolchildren, craftsmen, the old, everybody turning prayer wheels, from dawn to dusk, from one holy place to another, kilometres and kilometres of prayers each day. Perhaps Tibet’s soul is in its shoes. The Dharma wheel with its eight spokes, like the wheel of a gypsy wagon. 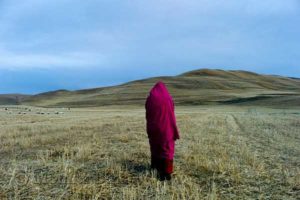